Recording of the National Conference Call on the Minimum Wage.

https://soundcloud.com/karmagal/minimum-wage
Posted by Uniting People (UP) at 5:43 PM

Useful facts and figures on the Minimum Wage

End the wars; tax the rich to pay for job creating programs and projects.

No one should have to work for less than it costs to live.


All info on our blog here:

Getting calls for campaign contributions from the Democrats? 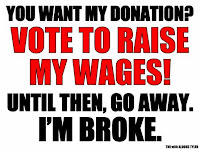 Our nation-wide meetings are held by telephone conference calls the third Sunday of every month:

Please provide, in the e-mail, your:

Uniting People (UP)
United States
Below you will find the original call for our 1st historic meeting - "UNITING PROGRESSIVES for Peace, Equality, Full Employment, Universal Health Care and Environmental Protection" - on May 19th 2013 (the 88th anniversary of the birthday of Malcolm X).